April 29, 2018
I know I haven't been keeping up with the blog and posting as often as I said I would, but I guess that's what happens when the days really do start to seem more normal, and don't feel like there is much to update about. Then when there is something exciting going on, by the time I can get to the blog I'm pretty well worn out for the day and then I'm slow to get to it afterward. Well, I will continue to provide updates, as I can and we'll just have to see where it takes us.

Jason's sled hockey season is over and he had a great time with it. He was not able to go to the final tournament, in Chicago, due to travel challenges. First challenge was simply getting there - there really isn't any way to get there, that doesn't simply totally wear him out, and then he needs the next day to recover. We think we may have figured out a way around this, though it actually means more travel time, rather than recovery time. We have found a van that can provide a resting environment, where Jason can lay down for most of the ride, and then he can be effectively ready the next day, after getting there. Still a few kinks to be worked out, but it is looking better, and once we do have it I will be sure to give the blog an update.

Otherwise the skating allowed Jason the ability to get out and do something; allowed him to interact with other people (both men and women skaters); and, most importantly it gave him a new thing to go explore with his girls. This past weekend was open skating and family time on the ice, and Stacy jumped at the chance to get on the ice with her dad. Jackie started to then became very nervous and didn't want to go. I told her it was okay, and that she would have other opportunities to get to know the ice and that she didn't have to go right then. Below you can see a video of Jason and Stacy, on the ice, and she did really well. She actually first tried to get out on skates, but didn't feel comfortable, so finding out the sleds were available she jumped on it very quickly. I, myself, put on a pair of hockey skates and went out on the ice to get the video - first time for wearing skates in about 20 years. I was a bit shaky, yet managed to stay up until I got off the ice.

Jason has decided that he wants to have more chickens around the house, so he's building a larger enclosure, and we will soon have 12 chickens, instead of just five. The funny thing is that we are now getting more eggs than we normally use, and our guess is that we're going to be having even more eggs, and we'll need to find some good homes so people can have fresh eggs for breakfast, or for whatever they wan to use them for. Jason is putting a lot of work in to this new "chicken-run" and is probably going to be building a new hen house/chicken coop.

We all went to the Renaissance Fair, in Encinitas today, and we all had a great time. We got there a short time after they opened up and the first thing was for the girls to get their "Treasure Maps." We were there for a full four hours (maybe a little more) and by the time the girls finished their maps it was time to come home. People were very friendly and enjoyed talking with Jason, as well as having fun with the girls. Linda and I did our best to allow them, Jason and the girls, to have their family time together, and Grandma and Grandpa were just along. By the time we did get home, Jason was worn down pretty good and went straight to bed. Funny part is that just a short time after getting home the girls asked about going for a bike ride with Grandpa, because they hadn't been on one in several weeks. As it turned out Stacy had a flat tire and her bike needed some other attention so we didn't get to go for a ride. We did get over to the bike shop and found a new bike for both of them, so it turned out okay and everybody was happy. Now, I do need to be clear... we didn't purchase new bikes, just found something when the time comes TO purchase new bikes.

Anyway, I hope you enjoy the photos below, and can see that Jason and his girls are doing well. Thank you, for continuing to read this blog, and please feel free to leave comments, as it is open again, and I think it would be good. Take care and continue to keep Jason and the family in your thoughts and prayers. 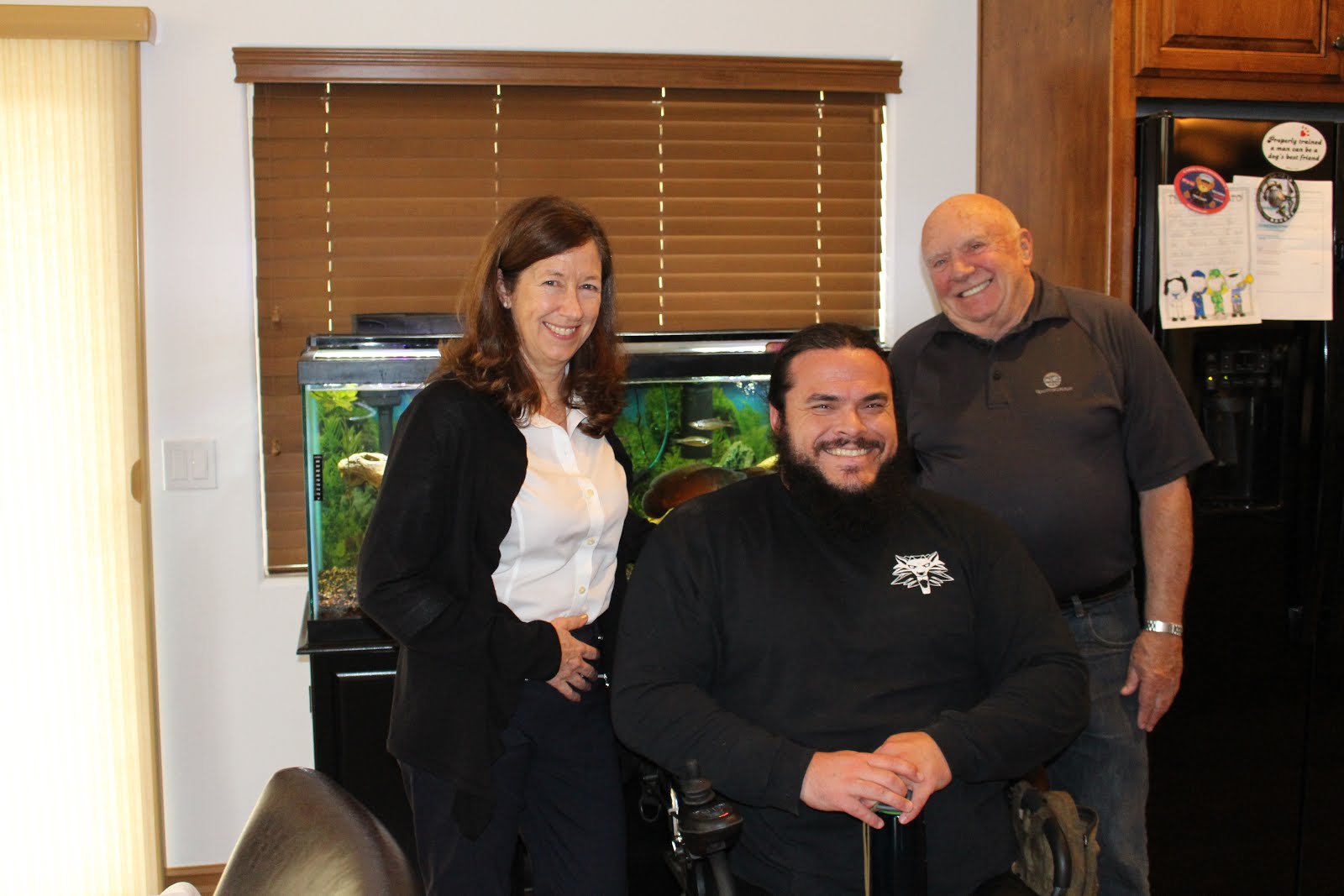 Jason gets a visit from Gen. Jon Monett 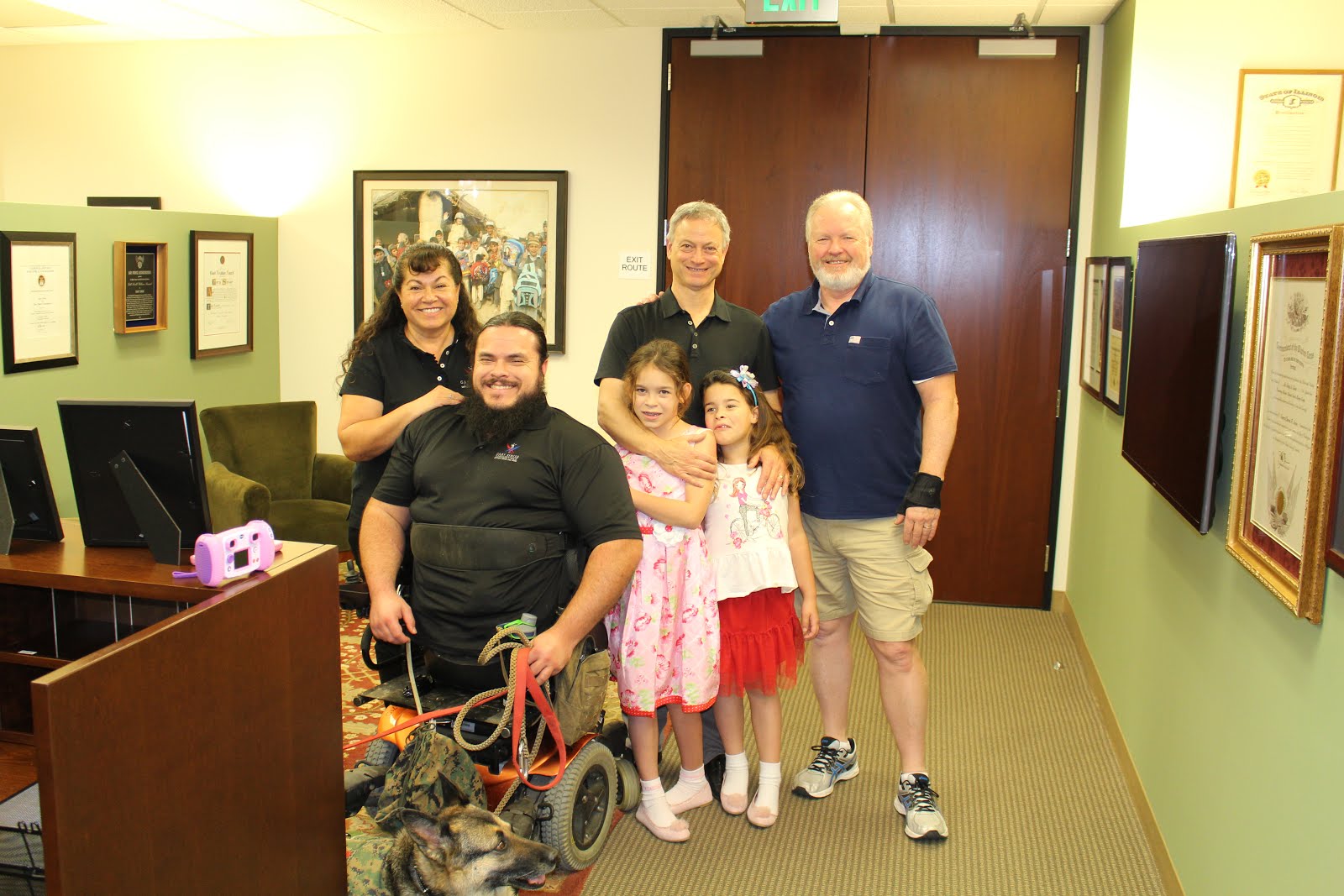 With Gary at the GSF Office

Popular posts from this blog

April 09, 2019
Again, I have no reasonable excuse other than to say I got side tracked. On the last post I mentioned that Jason had gotten injured, while playing in the hockey tournament. Well, as it turned out it was a more serious injury than either of us had suspected. The outcome was that he lost some soft tissue and a section of his pelvic bone was exposed (about the size of a quarter) and he is now required to have a wound-vac so that it can heal properly. This means that he has to spend most of his time in bed and can only be up in his chair for no more than 20 minutes at a time, and that followed by hours of rest time. The rest time is for the injury, and not necessarily for Jason, as he isn't tired. As you can imagine, he gets very board with this "life style" and wants to get up and go do something.

We've been going in to wound-care frequently, once or twice each week, and they keep telling us, "...we'll take a look at it next week, to see what happens next."…
Read more

March 17, 2019
Today is eight years since Jason came out of the induced coma and he has been on a overall positive trail ever since. There have been a few set backs and the expected twists and turns, but overall he is doing pretty well. The last post talk about the Colorado Hockey Tournament, and it was a fun and challenging event. The down side was that two of the players on the Ducks, Jason's team, were injured and one of those two was Jason.

The first one was the more serious injury, as Sarah, the team captain, was hit in the throat by a puck, at close rang and it took her out of the tournament. Her larynx was hit and it totally knock her out, for a few seconds. Fortunately her husband, Matt, was there and he was able to help her to a moderate level of recovery and then took her to the hospital. She seems to have made a full recovery now and will be skating again as soon as she can get to the ice. The second injury, Jason's, was when he fell over, while making a fast turn, and slid right …
Read more 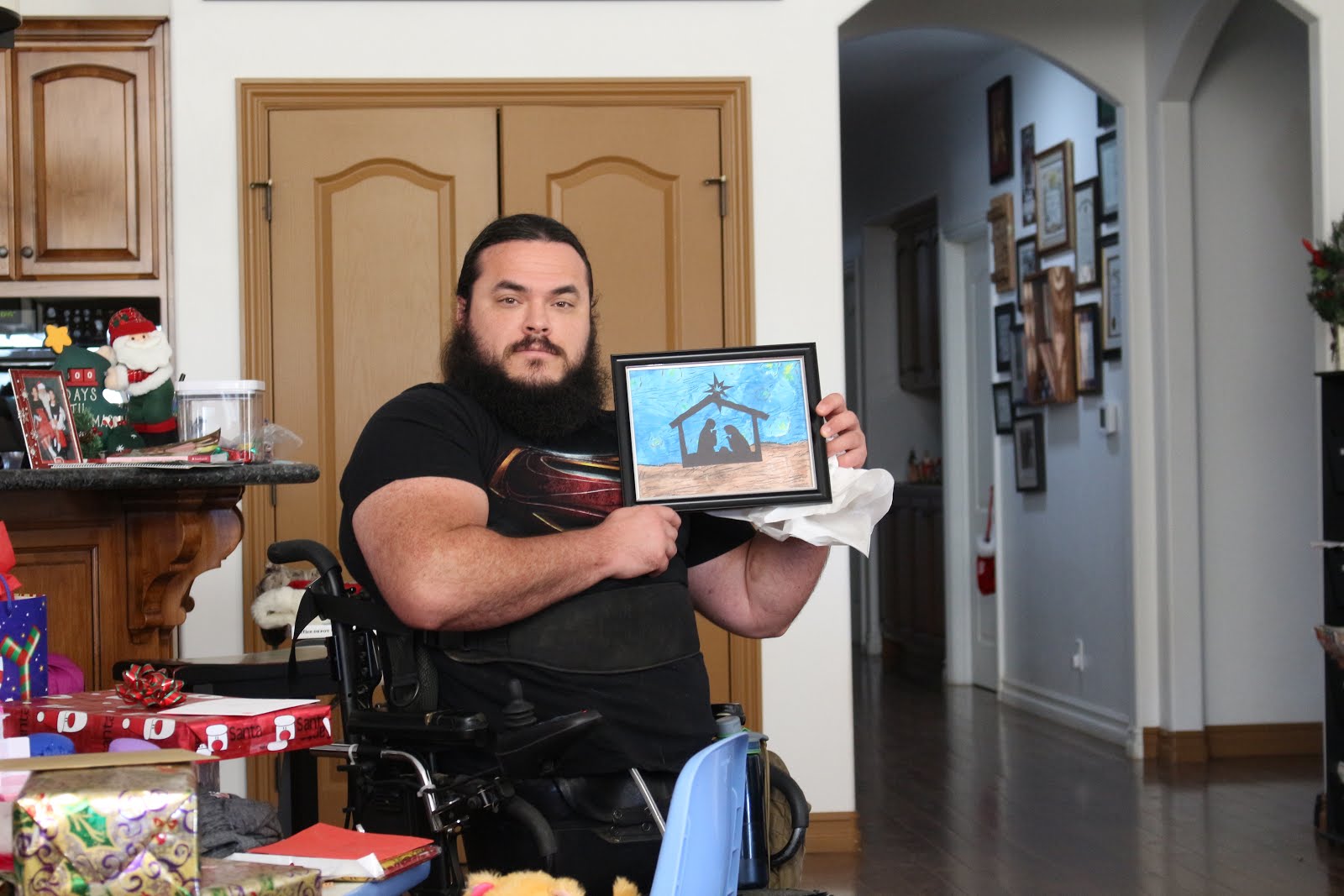 Art Project from Stacy to Daddy 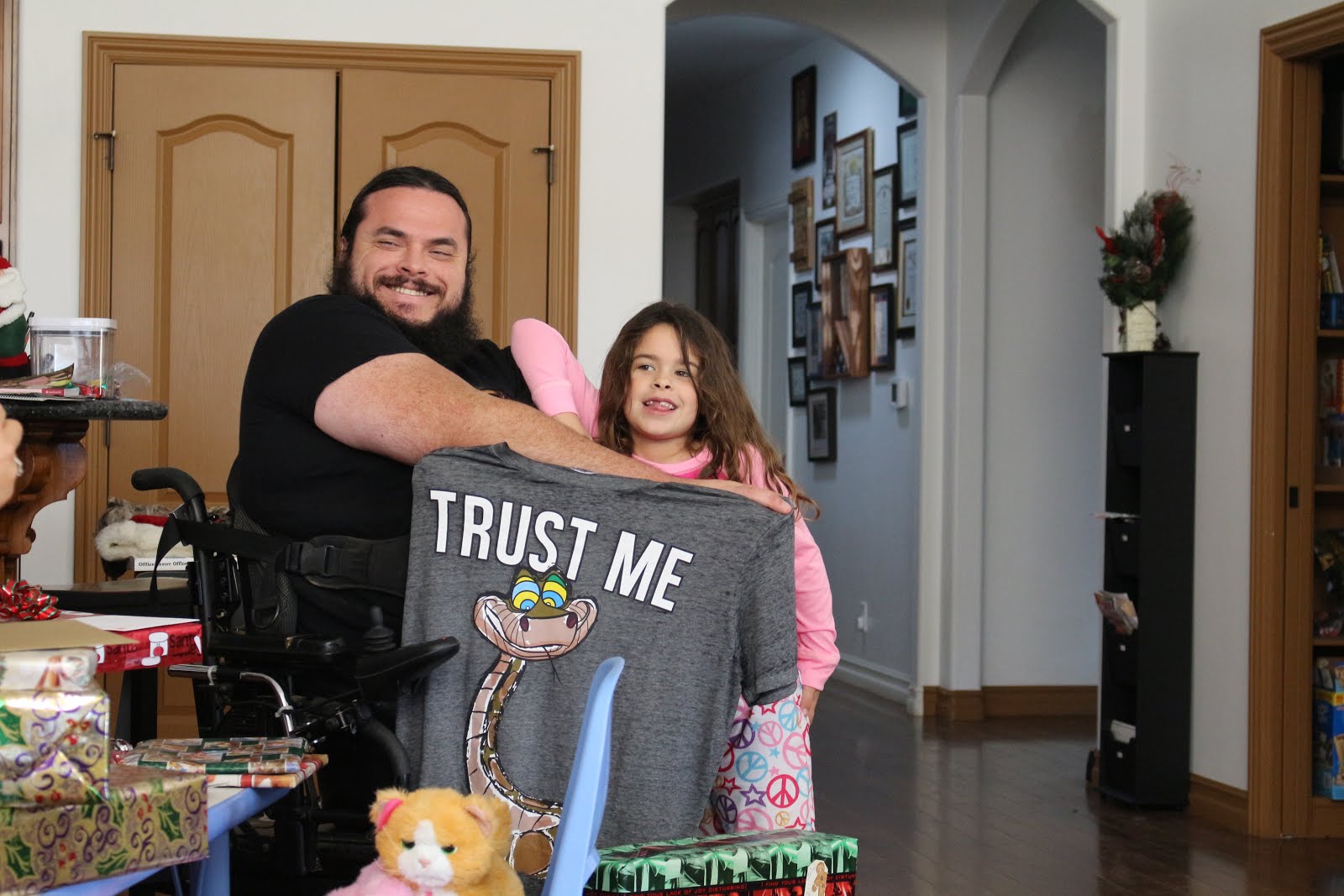 One of Jason's favorite shirts 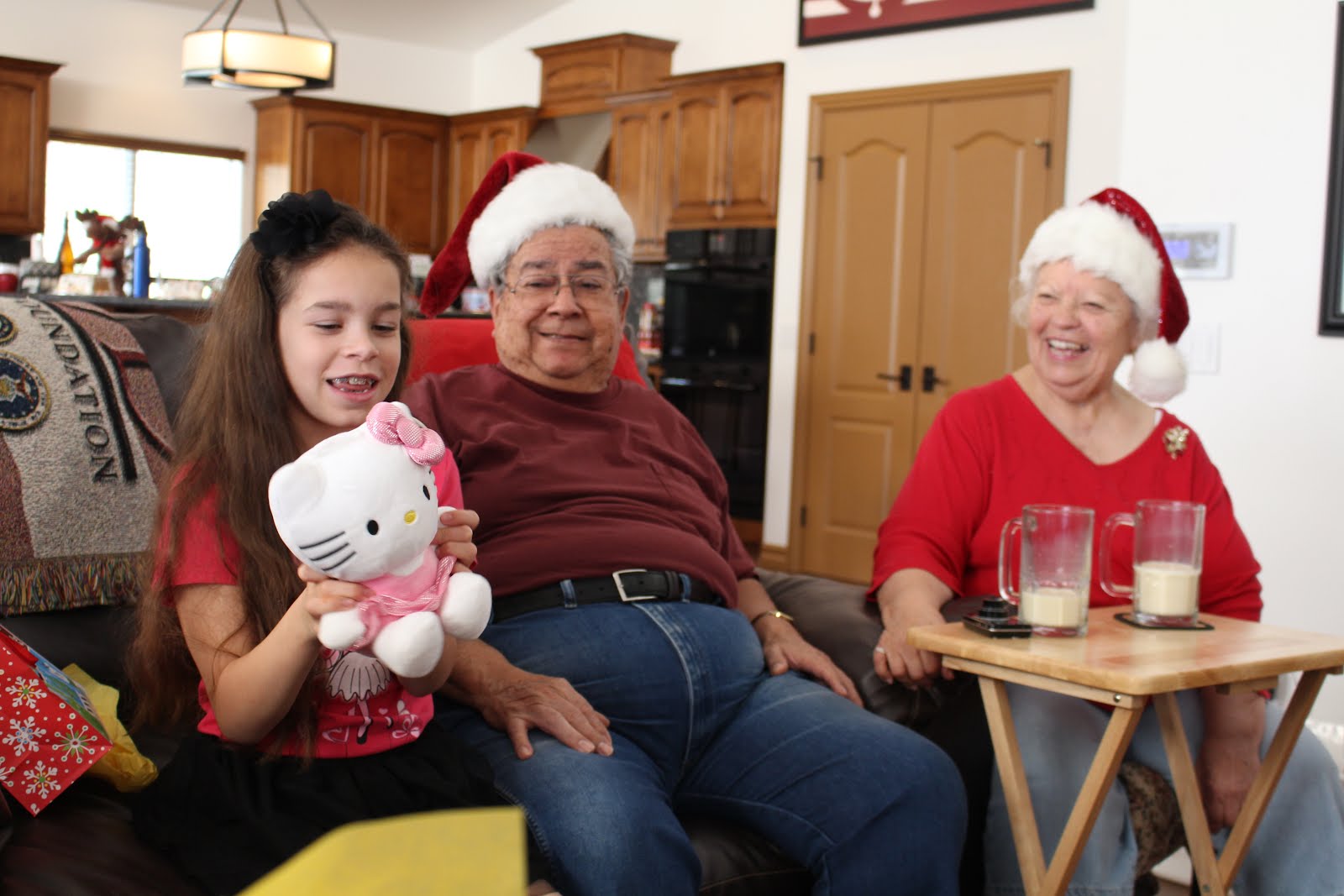 Stacy with Tata and Nana 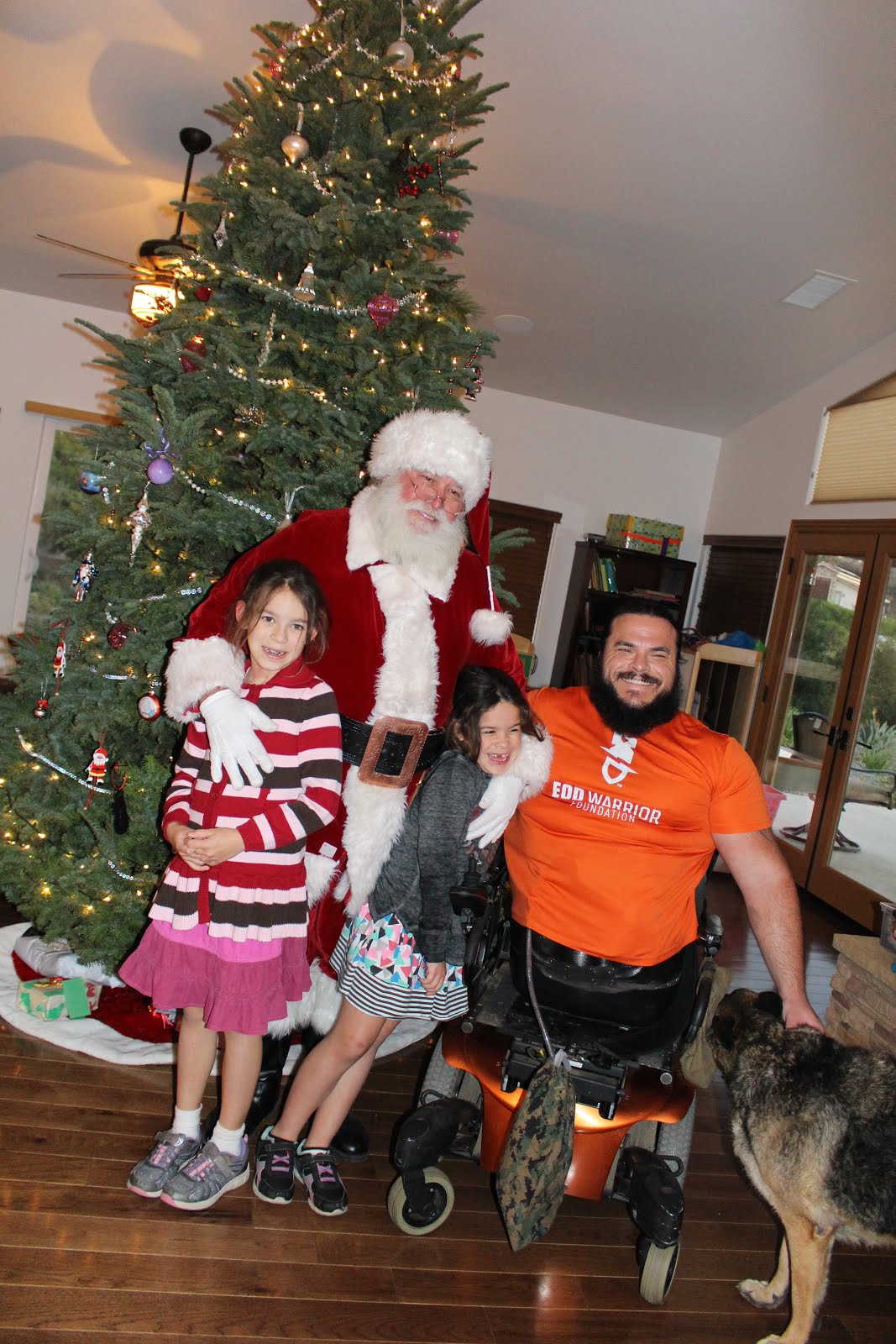 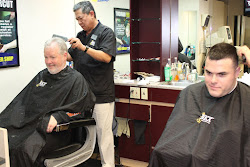 They take more off my chin than off my head. 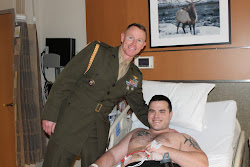 Jason and the Major